"So, how's the remote working thing going for you?"

Right about now I get this question a lot, not only from other team members, but from friends and family struggling with working from home the first time and dealing with all the changes that go together with this situation. Since I've worked remotely for quite some time before Corona happened, and most people write about logistical and technical problems or the troubles that business owners have, I'd like to talk about the company culture part from the perspective of an employee.

It's fair to say that we weren't big on remote working a few years back. Being mostly software developers and web designers, we basically had the opportunity to work from anywhere with just our laptops all along. However, for a long time this was mostly discouraged. The single most important reason for this was simple and I can see the appeal there: We are a tight knit group of people who will hang out after hours a lot so that working late would shift gradually into partying on more days of the week than not. Working remotely wouldn't really fit into this concept because constantly hanging out with your friends via webcam isn't the greatest for most people.

As the company grew and we suddenly had students on board studying in another town, some of us having children and needing more time at home, and even me proposing that I'd need to work from Sweden for quite some time due to personal reasons (my girlfriend moved there), that was when the demand for remote work became bigger and more obvious.

That this way of working was an afterthought became quite obvious at that point, because most of us weren't used to it. For example, asynchronous working is a skill we had to learn and still have to improve, where remote doesn't mean that you're available by email and Slack 12 hours a day. The need for messaging and writing things down in detail increases but it's really important to time-box these activities. Maybe check your messages at predefined times in your working day, maybe around conference calls, where focus is low anyways. There's nothing more unproductive than getting pulled away from focused work by constant notification bombardments.

But that's only one example and I'd like to dive more into company culture now. With the ability removed to hang out in day to day life and having to cancel a lot of meetups and talks because of social distancing, it's a challenge to keep the spirits up and people connected. It doesn't matter how much of an introvert you are, real social interaction is an essential part of us and with a big part of that removed by not being able to see and hear people (even subconsciously) at the office all the time, it can get lonely in your home really fast, especially if you live alone anyways.

So naturally we thought about ways to keep connected and some of these may work for you and some don't, but let's just have a look at what helped us these last days:

There's a lot more going on and these have been only insights of the first weeks of working in de facto lockdown, but for now things are working out quite well.

So, what happens next? For us, that's up to the amount of new Corona virus cases in Germany and how the authorities will react to it. A possibility could be that we'll move to a model like in China where everything is still super strict, but business is picking up again. Or maybe we'll be in tight lockdown for a few months. But whatever is happening these next weeks, I think we are mostly prepared for it. It took us a time getting used to the circumstances (and seriously, most of us would like it to be over very quick), but now we have the means to stay connected, healthy and even productive for the time being.

Stay tuned for the second part, where I'll take a glimpse into the future of remote work and education.

Did we spark your interest? We currently have some opportunities open so get in touch with us! 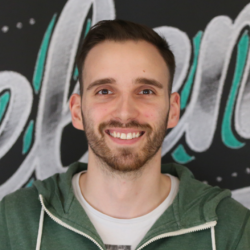