Two years ago, Martin, author of the following post, was about to become a carpenter. Instead, he became our apprentice and a fellow webdeveloper.

Needless to say how drastically this changed his perspectives.

It was not an easy decision to take somebody with almost no relevant background or references into our team and teach him how to build web apps. It requires time, attention and patience; assets which are tremendously valuable in this fast living and growing industry. And since these are so valuable they became rare. Honestly: Aren’t we usually lusting for Stanford graduated robot ninjas who started coding unicorns when they turned five?

In the digital age teaching has become pretty impersonal. I think this is a mistake, and making exceptions in the recruitment process every now and then can make a huge difference – not only in the life of a single person, but also for a company and its culture.**

Recently Martin created attackemart.in, a simple and elegant personal website. It quickly became viral and eventually won the prestigious Awwward. He did this after his first year. And boy, are we proud.

We asked Martin to write down his story and share it on our blog, because we think this is a success story of its own. The success of having unearthed the talents of a prospect carpenter.

Hey, my name is Martin Gauer,

Two years ago, I was about to start an apprenticeship as a carpenter. However, it wasn’t really what I wanted to do, since I had a deep interest in designing stuff. I had created cover designs for some bands and photoshopped some small websites before. Therefore, I was desperately looking for a place where I could learn more about these things, and eventually succeed as a designer.

While googling around I came across the website of 9elements, and loved what I saw. I immediately contacted them to ask if I could work there.

Initially, they hesitated but since they saw some potential in the stuff that I’ve designed, they offered me an internship.

My internship felt a little like a total brain wash: When I started, I quickly found out how little I knew about design and user experience. I didn’t really know what’s going on in the internet, what’s hot and cool. I’ve never heard about HTML5 and CSS3. Bottom line, I started from almost zero.

During this time, almost all my designs were smashed down by either Eray or Sebastian, who told me I could do better. They asked me to start bookmarking and collecting websites that I like and to mimic their style, before creating my own. They asked me to sign up to Twitter and to follow the best designers around the world. Set your benchmark as high as possible, so you’ll never have to chance to tread water.

It was pretty frustrating to see how far I was from being a good designer, but it also fueled my curiosity and determination to succeed. I stayed in the office as long as I could. Sometimes I just didn’t want to leave at all.

Later, they told me that exactly this attitude convinced them to open the doors wide for me. At last, when I asked them to become an apprentice at 9elements they agreed.

Learning you are, young padawan.

Their offer came with one condition though. They wanted me to enroll as a software developer rather than a designer. ‘Design and Code go hand in hand, it’s almost the same thing. The one you’ll see, the other you’ll feel’. They argued that it’ll be far more powerful to build what I envision than just to design it.

This offer was somewhat unexpected, but honestly, the more I thought about it the more I liked the idea. It turned out to be great decision.

So I started to learn how to code. It was a very steep learning curve since I had no coding background at all. I learned how to create clean and scalable markup, and had the luck to look over the shoulder of one of the bests. I had the chance to work extensively with CSS3, media queries and mobile design.

Today I’m already in charge of creating and maintaining HAML / SASS for most of the 9elements projects.

When 9elements launched their new website in the beginning of this year they got some traction and won some awards. And I thought: hey, this is something I want to accomplish, too! I was determined to build my own website and to make it awesome.

Naturally, it wasn’t that easy. It took me several iterations - you probably know the game - sketch, code, redesign, throw away, create from scratch, design, code, etc. Finally, in October 2011 it was finished, polished and ready for deployment.

The development process was extremely valuable: I learned turning a vision into design and design into code - full stack!

Of course, I was very curious if the concept would get any traction. After launching the site I’ve submitted it to various CSS galleries and tweeted the link. And boom! People started tweeting about it and the feedback was overwhelming. Two days later, Jan emailed me that @soxiam, the lead designer of Vimeo featured me on his personal blog. The internet is such a wonderful place :)

Finally, my goal was to win the prestigious awwward. It took almost 8 days - but here it is, I got it! And I’m proud as hell.

Huge thanks to my team for helping me to be more than I could have ever imagined. I consider myself really lucky to be part of it! 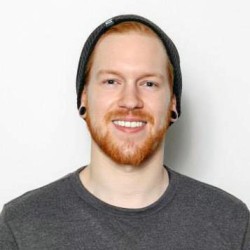